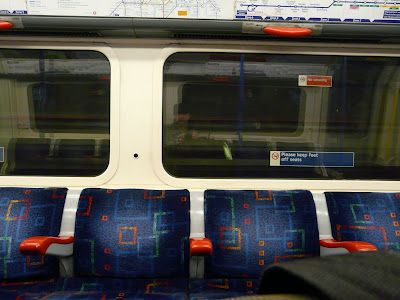 Me reflected in the train window as I made my way from the Heathrow airport to the hotel. Click for the close-up.

Whew! That was one quick trip! Lorelei and I hit up London like a couple of crazies. We arrived on Sunday morning and immediately set out to see what we could see. That adventure landed us in the area around St. Paul's Cathedral and in a restaurant where we experienced some of that famous British food we had heard so much about. It wasn't good. We both got burgers that looked so good and smelled divine but tasted like absolute poo. My guess is that they scraped every left over piece of meat that was laying around, formed it into a patty, covered it in avocado (the only redeeming part of the meal) and laid some truly gross "streaky" bacon (their term) across it and called it a burger. It was full of gristle and other mystery chunks. I immediately had a horrific stomachache and had to find some relief in the way of Milk of Magnesia. Thank the lord for that chalky magical liquid. I chugged it straight from the bottle while walking the streets of London.

The only other bad food experience I had was actually not that bad at the time. It was only later, when I returned home and googled "black pudding" that I nearly vomited when I read that it is the same thing as blood pudding. I should have known. I mean, I watch British TV shows more than American ones. But I was hell bent on having an authentic Full English Breakfast and that was part of the deal. It didn't taste too bad. Kind of like what I imagine canned cat food to taste like. A little pasty and slightly liverwurst-ish. 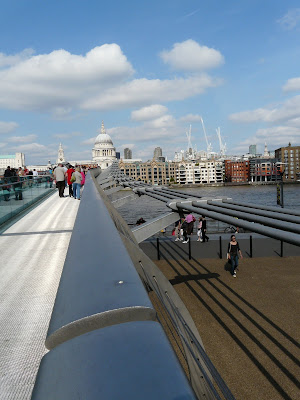 Crossing the Millennium Footbridge over the River Thames. That's St. Paul's Cathedral in the distance. 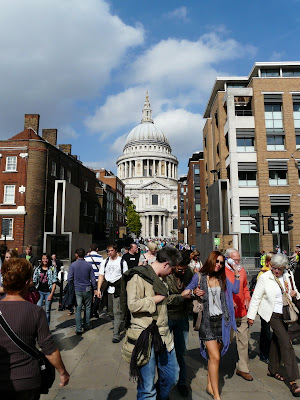 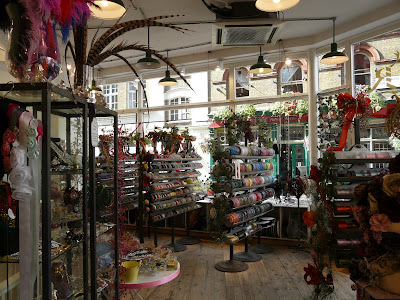 The inside of V.V. Rouleaux - the most wonderful ribbon and trim shop.

But enough about the food. The real fun came when shopping for beads, buttons and anything else we could find that could be used in the making of our jewelry. We both went into spasms when we accidentally stumbled upon this ribbon and trim shop called V.V Rouleaux. I see that Lorelei has already posted photos of some of her finds (trust me, she isn't showing you everything... that girl went nuts!). I tried to control myself and save my money for the Button Queen. It wasn't quite as glorious as we had hoped but it was pretty great nonetheless. And I did manage to load up on some beautiful buttons that are going to make excellent molds - so keep your eyes peeled for some London inspired pieces in the future. We also had great fun at a shop called Cloth House. They had tons of vintage fabrics and buttons. It was a super pricey place but that didn't stop me from buying a nice little pile of buttons. From there we hit up some bead shops and in the end we were both pretty satisfied with our piles of
beady/ribbon/button goodness. In fact, we ended each night by taking out all of our loot, laying it out across our hotel beds and just starting at it. (Yes, we need help) 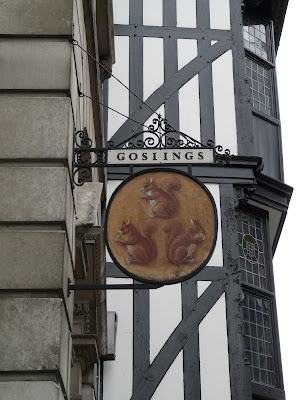 I won't bore you with every little detail of the trip. We did visit the Tate Modern (my favorite place of all! What a thrill to be surrounded by all my favorite modern artists) and we did a quick run through of the British Museum (I had to pay my respects to the Rosetta Stone on behalf of a friend). But my favorite adventure was taking a Jack the Ripper walking tour through the streets of Whitechapel at night. I'm a bit of a Ripper freak so this was a highlight for me. To walk the same streets and stand at the locations of each murder was quite thrilling (I sound like a real ghoul, I know). There are areas that look just as they did at that time and our tour guide, Chris, did an amazing job of recreating the era for us. If you are ever in London be sure to take this tour. (And ask for Chris, he is the best!) 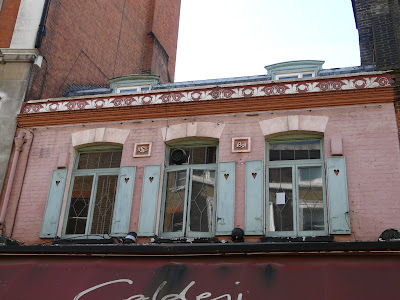 A wonderful building facade in pink and hearts. 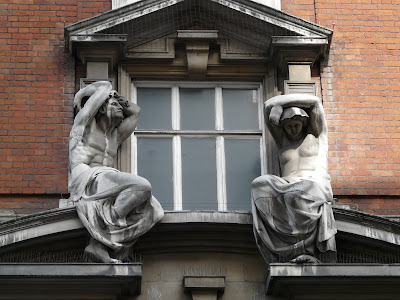 Beautiful statuary on the front of a building. 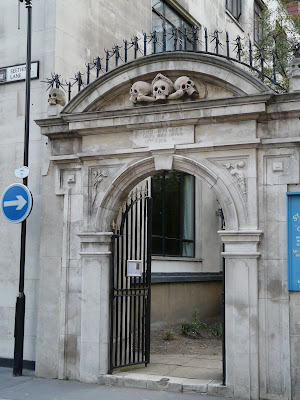 Skulls at the entrance to a church. Very cool. :)

So that was our trip in a nutshell. We had such a good time and the memories get better and better as I wake up and return to NY time. A super huge, GIGANTIC thank you to Lorelei for inviting me to accompany her on this trip! We make such great traveling partners (we should really have our show on some travel network!). :)
Posted by Round Rabbit at 6:24 PM

It has been quite fascinating to read of the exploits of two beaders in London! That might be as close as I ever get to going...love the bead and button and finding stash as well. Can't wait to see what inspires you two next! Thanks for sharing. Enjoy the day! Erin

Ahh...London food. I remember it well. On my trip we took refuge at a Wendy's - because it was the only place we could find anything resembling a salad!

And I see nothing whatsoever unusual in papering your hotel room with your purchases and staring at them for hours. Totally normal :-)

I love London but detest British food. Bland, boring and some of it disgusting, as you found out. What wonderful beading experiences you've had. But the bestest is the Tate. The Tate is perhaps my favourite museum in the entire world. I'm so glad you got to go.

so cool! love the first picture... and the museums... ahhhh... did you see the elgian marbles?

So sorry about your poo burger and blood pudding experience. Sounds pretty nasty. Your pictures look awesome and the weather looks to be nice while you guys were there.