Chances are good that I am a slob 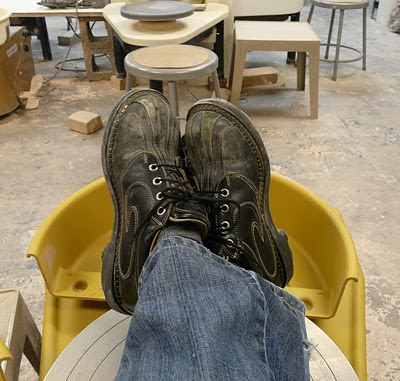 Well, this is hardly news, especially to anyone who knows me. I am a bit of a slob, there is no denying it. Some find that hard to believe since my work is very clean and tidy looking. But, it's true. Today I had to laugh at myself when I realized that the clothes I was wearing are the same clothes I have been wearing in the studio for years now. I have washed them, don't get alarmed, thought not too often. Ha! I kid, I kid...

There was a time when the shoes in the photo above were new and awesome and I thought I was very awesome for owning them. Now they are ripped and worn and stained with clay and glaze. They still work, though, so they won't be going anywhere anytime soon. One of these days I would like to get myself a new pair (that I would NOT wear in the studio), though after seeing how much they have gone up in price I don't think that will be happening right away. (Of course, it has been about 11 years since I bought mine.. the price was bound to go up by now...) 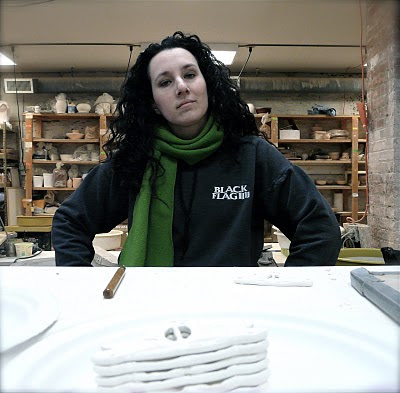 I've had this Black Flag sweatshirt for at least ten years, probably more, and it is still one of my favorites. I wear it to the studio a lot and have been for years. I looked though some of my photos on Flickr and laughed when I saw nearly two years ago to the day I was wearing this same sweatshirt in the studio. Hey, if it ain't broke, don't fix it. :) 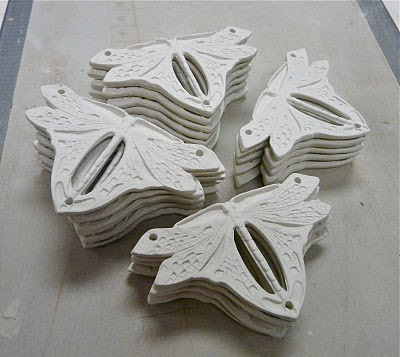 While me and my slobby clothes were in the studio today we got a ton of work done. Above is a sneak peak at what I am getting ready for my next Extra update. Those of you who have followed my work for a while will recognize the dragonflies. They are one of my early signature pieces. For years people have asked me if they could buy them to use in their own jewelry and I have always refused. But now I am giving everyone a chance to get one!! Woo-hoo!! It will be a limited edition run of just 20 pieces. And then I will never make them again. Except for me. :)

My goal is to have them ready to list on Friday. As long as the weather here in upsate NY cooperates and I can get in to get everything glazed in time, that is the plan. I will post a definitive date and time once I know for sure.
Posted by Round Rabbit at 7:02 PM

Nancy I just got arround to reading the winter Belle Armoire and I absolutely LOVE the piece you did with the Gardanne bead and your big green focal. It's in my big stack of torn out pages of pretties.

Thanks, Jen! That was a fun one to make. Her beads are sooooo gorgeous and super inspiring...

I can relate to slob and old clothes...i wear a pair of Aéropostale sweat pants that i've had for years....they're too short to regular shoes...they only work with boots....they are like pajama's....only worse....and i like that they're stretchy in the waist....everyone needs fat pants...and they have to be washed often or they get too stretched out and can't really be worn. The slob part...that should be obvious from the previous text. Hope your new pieces/series goes well! ♥Sue

OMG - love those dragonflies. I hope I can snag one!

I love your posts - you are so funny!

hehe, i'm so much the same w/ my clothes. i looked at my closet and realized that i'm wearing the same things i need at least 6 years ago. some of the things are just repurchases of the exact same style shirt/pants. i finally broke down a bought a new sweater this winter and threw out an 10 year old shirt that had lost its shape and much of its color.

i need to break down and get some nice things...for when i need to not look like a slob.

p.s. those shoes are awesome!

Heee, I love it! And glad to know that I'm not the only one who wears something until it falls off in distress ;) Those shoes are awesome, and get my shoe hoarding tendency jonesing...

Love the dragonflies...and the sweatshirt! :)

mmm...can't wait to see them coloured :)

Oh no, sad Fluevogs! They may be able to shine again and you can avoid spending $200 on new ones. My partner has managed to clean off her Blundstone work shoes (and she's a scenic artist, so it's 1/2 inch of multiculoured paint spatter). It's hard, though - possibly a job for a professional cobbler/shoe repairer. But it's amazing how quality shoes can recover from scuffs and stains.