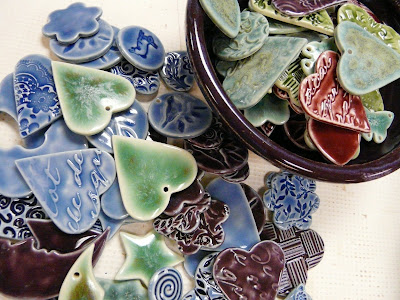 I made my way to the studio yesterday after a change in plans. I was supposed to be at the Farmers' Market for the first time this season but they were full, or so they said. Turns out (according to my on the scene sources) that there were in fact empty spaces. If I had driven the hour and half at 5 in the morning I would have been able to get one, but somehow that didn't seem like a fun idea. After the shooting tragedy in Binghamton the day before I wasn't feeling too "get up and go" on Saturday. So I went to the studio and did some work.

As I mentioned, the studio is on the same street as the American Civic Association where the shooting took place. I chose not to go see it. There were dozens of huge vans with satellite dishes on top from every major news source lining the street. People all over taking pictures. It was cold, windy and raining. A dark day all around. Working helped to take my mind off it all but somehow the whole atmosphere seemed dangerous. I see this morning that this tragedy has already been knocked off the top story list by other shootings and deaths. Such is life in the US, I suppose.

In other news (no more dwelling) my sale continues. I want to thank everyone for their support. It has been a great sale so far! There is still one day left and I will be restocking many items today. So be sure to check the shop a little later to snag some more bargains! :)

So sorry about the terrible tragedy. I can understand having it happen so close to you, it's hard for it not to stick with you a little. I'm sending Peace and Love your way! Your porcelain pieces look wonderful!

Studio therapy is the best there is for troubled times, I reckon. Still have all of you over there in my thoughts even if it has slipped the front page. It is truly amazing to me how short the American attention span is.

Thanks Erin and LeAnn. :)

Looks like your therapy day turned out to be quite a prolific one. :o)